Debuting #1 Thanks to You!

This just in from AIMS / Alliance of Independent Media Stores WE CAN’T THANK OUR FANS ENOUGH!!!!  THIS IS ALL BECAUSE OF YOU!!!

The first PICK ME UP review is in…

Music Connection magazine turns in a 9-star review (out of 10) for Pick Me Up! 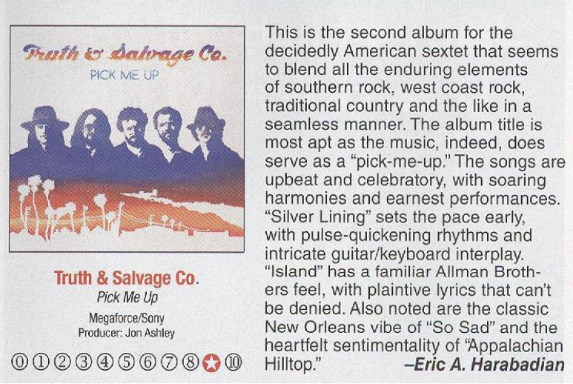 TRUTH & SALVAGE CO. will hit the road for five weeks beginning July 23, the very same day their new album PICK ME UP (Megaforce/Sony RED)–a stirring blend of rock and Americana–hits stores.  The trek will kick off in their adopted hometown of Nashville, will weave through the southern U.S., move across the country through the Read more…

TRUTH & SALVAGE CO. return July 23 with their second album PICK ME UP (Megaforce/Sony RED), a work that powerfully builds on their stirring blend of rock and Americana introduced on their acclaimed 2010 self-titled debut album. Distinguished by their four lead vocalists and five songwriters, plus soaring four-part harmonies and a strong guitar-keyboard meld, the band co-produced the album this time around with Jon Ashley, while longtime band cohort Bill Reynolds (Band of Horses) handled the mix. It is a joyous tour de force recorded at Echo Mountain studio in Asheville, NC that features 12 original tracks and a cover of Joe South’s Grammy-winning 1968 hit “Games People Play.” Opening with the plaintive “The Bad Times,” the album shifts into high gear with “Silver Lining” and keeps the highlights coming with such songs as “Appalachian Hilltop,” “Bird On The Wing,” “I’m Not Your Boyfriend,” the title track and the rollicking “So Sad.” Look for TRUTH & SALVAGE CO. to announce a tour to support PICK ME UP.

The band–Scott Kinnebrew (guitars/lap steel/mandolin/vocals), Tim Jones (guitars/vocals), Walker Young(piano/organ/accordion/vocals), Adam Grace (organ/piano/Wurlitzer/additional background vocals) Bill “Smitty” Smith (drums/percussion/vocals), and Dean Moore (bass/ additional background vocals)–has ties to Asheville, where Kinnebrew, Young and Smith played together before relocating to Los Angeles and starting TRUTH & SALVAGE CO. with Jones and Grace. Growing into a potent live act that’s hit the road with The Black Crowes and the Avett Brothers, the band toured for a year and a half on the first album before relocating to Nashville.

True to its title PICK ME UP, this is an album that soars. Tim Jones says, “We liked the triple meaning of ‘pick me up,’ how you could not only be asking someone for a ride, or literally encouraging someone to pick up the album, but also how it’s a metaphorical lift, which we were feeling we needed throughout the process.” Walker Young adds, “Lyrically we wanted that song to have an inspiring message, it’s talking about hope and perseverance in the face of loneliness and just the challenges of everyday life. The sonic mix we ended up getting matches the vibe perfectly, I think. It’s definitely a feel-good album…we were going for joyous revelry, music that would inspire the heart and mind.”

Scott Kinnebrew says the time between their first and second albums helped them grow: “We have had, really, four years since recording our first record and we have been playing our asses off. So we are better players.” Adam Grace elaborates: “For this record, we just wanted to record what we do live onstage every night. We kept things loose, had a bunch of fun, and just played and sung our hearts out. The result is a record that shows the real chemistry we share. You can hear it oozing from every song.”

TRUTH & SALVAGE Co.’s multiple lead singers and songwriters gained them a legion of fans, including Chris Robinson of The Black Crowes, who produced their first album. They released their debut in 2010, which was a noteworthy year for TRUTH & SALVAGE CO.: “More Than 103,000 Miles…Crossed Mississippi River 21 Times…732 Hotel Rooms…and 312 shows,” to quote the words that appear onscreen at the outset of the band’s video for their signature live-show-closer, “Pure Mountain Angel,” a song the group performed on their national television debut on “Jimmy Kimmel Live.” In his Rolling Stone review of the debut, David Fricke called it “…everything you need for a classic-rock party: muscular treble guitar, Hammond organ and four singer-songwriters harmonizing…(6/24/10)” 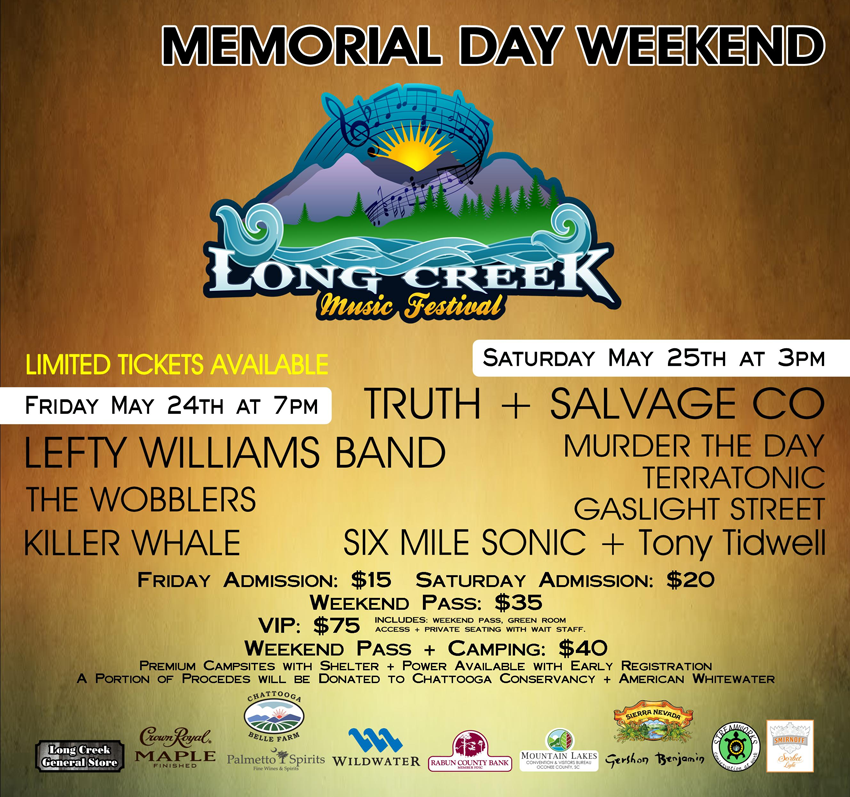 In the foothills of the Appalachian Mountains, on the banks of the wild and scenic Chattooga River, we’re proud to be headlining Day 2 of the Long Creek Music Fest … [click above for more]

Friday, May 17, we’ll be back at the Blue Canoe in Tupelo, MS, for Adam Grace’s Birthday Show! FINALLY he’ll be old enough to get into the clubs we play…..

The next day, Saturday, May 18, we’ll be rocking SpringFest in Batesville, MS, with “Beer on the Table” country crooner Josh Thompson. Bring the whole fam!

Truth & Salvage Co. will be returning to the stage this spring. Please join us in The Holy City for a weekend of music including ten bands over two days. We will be closing down the day Saturday, March 23. Check out the other acts and purchase tickets at http://www.springjammusicfest.com/ .

Enter the T&SCo Saturdeans Sweepstakes for the week of Dec 8, 2012!

(***UPDATE: Tune in to our Facebook page THIS SATURDAY Dec. 15 for the next installment of our weekly contest!***)

This week: Guess the winners of the 15 American Country Awards categories listed HERE and post your picks in the comments of the related post on our Facebook page. Whoever scores the most points will win one of the brand new T&SCo t-shirts of his or her choice AND the ”Salvage Songs” poster designed by acclaimed Chicago artist Jason Brammer!

THIS WEDNESDAY NIGHT!!!
Truth & Salvage Co. comes to you live online THIS WEDNESDAY Nov. 7 at 9pm Eastern for a one-of-a-kind special concert event! 100% of the ticket proceeds go to Music 4 Vets, the nonprofit we’re currently touring for that provides free instruments and music therapy programs to veterans. 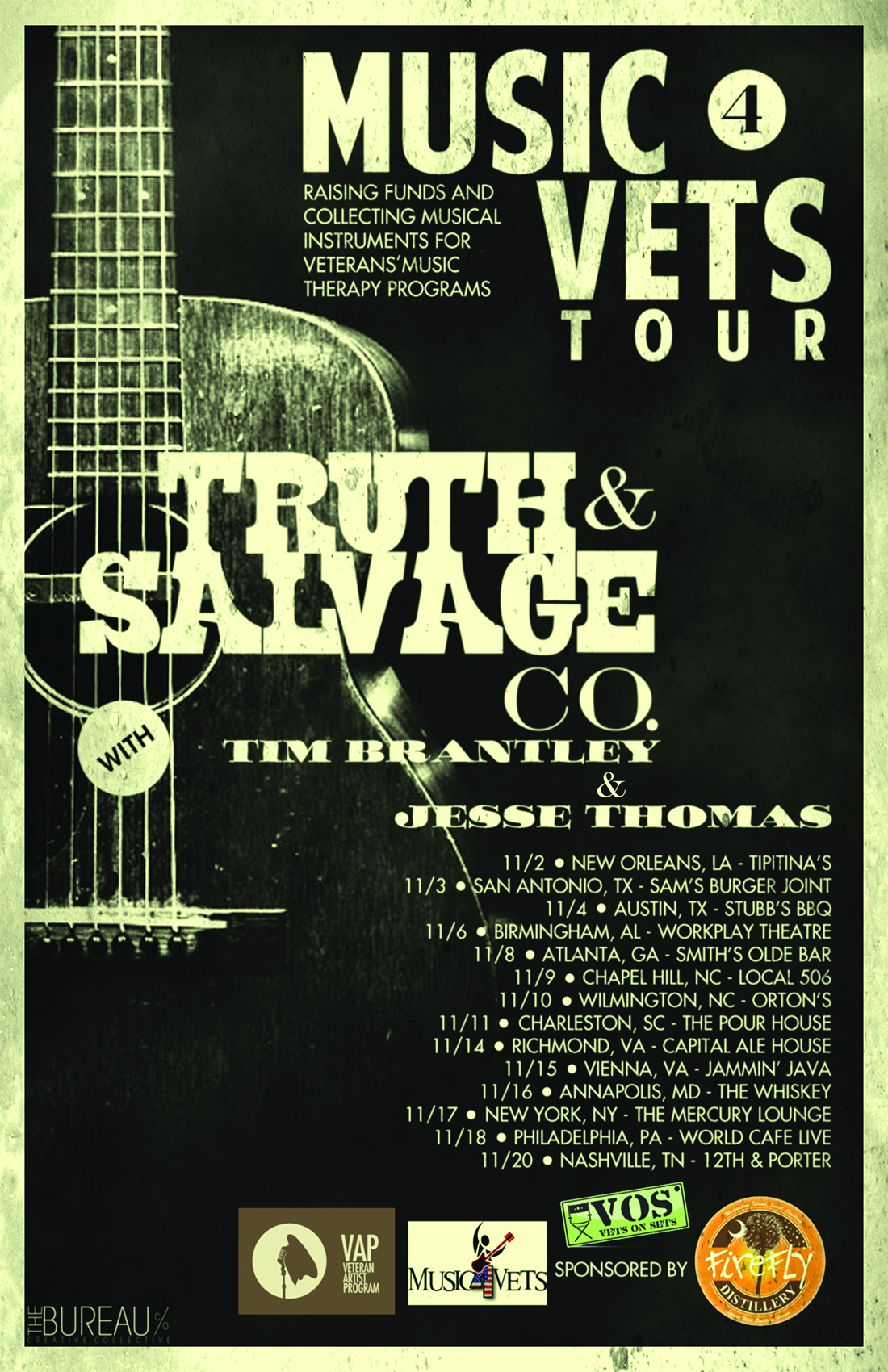 Truth & Salvage Co. are incredibly honored to be the featured performers this November on Music 4 More‘s Music 4 Vets Tour, a 14-date tour sponsored by Firefly Sweet Tea Vodka to raise funds for music therapy programs for veterans. Click above for more details and ticket information.