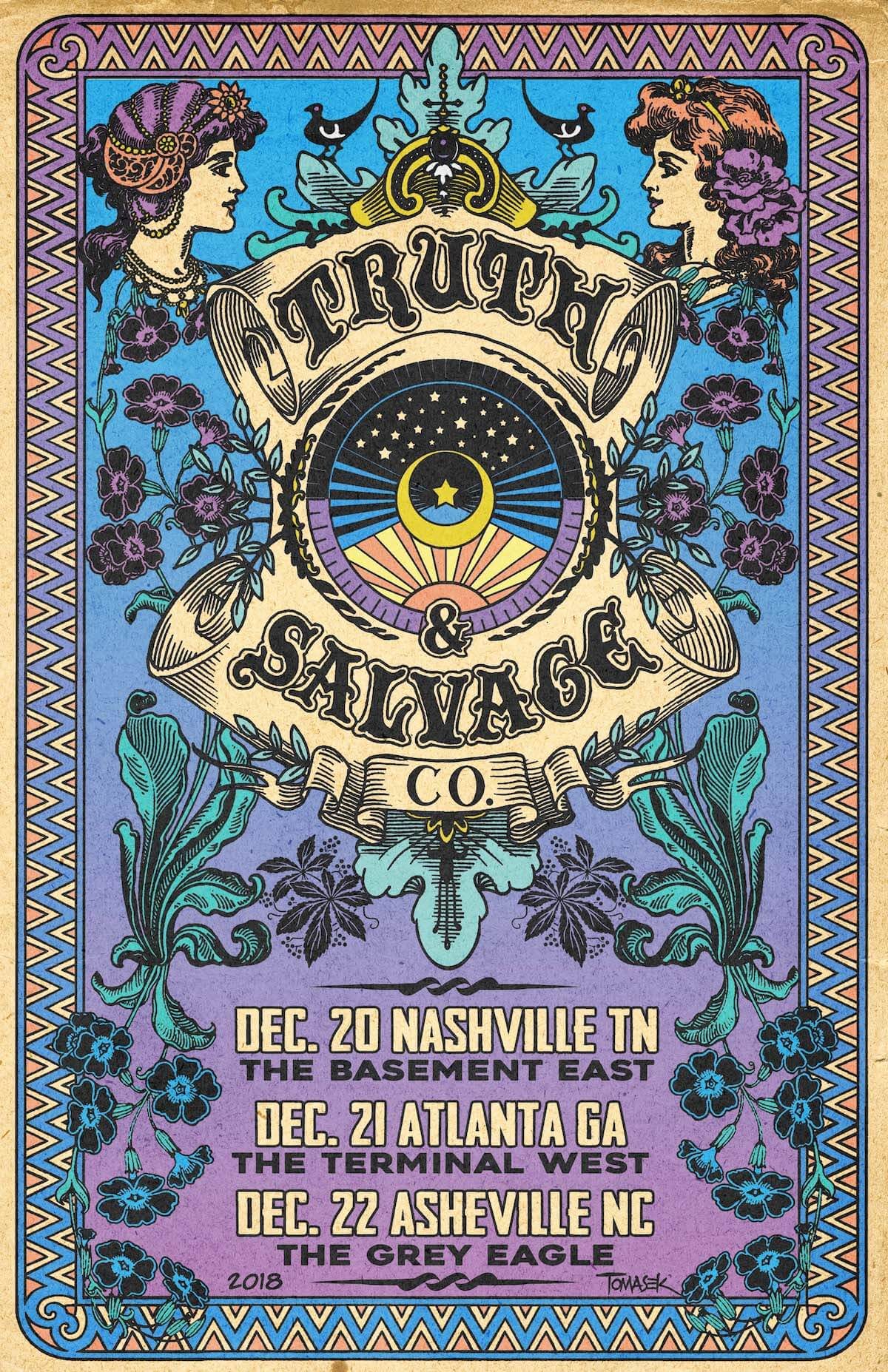 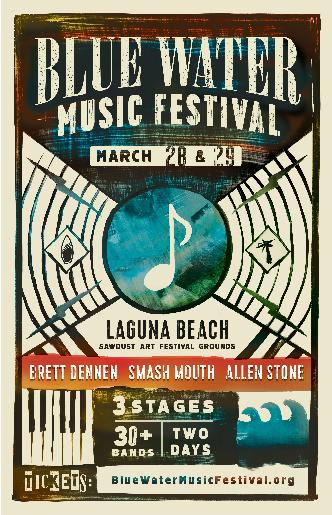 Truth & Salvage Co. is proud to be playing the Blue Water Music Festival in Laguna Beach, CA on March, 29th 2015. 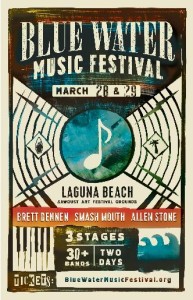 The Blue Water Music Festival brings in an eclectic group of musicians and artists, and the 2015 line-up is no different. From blues to California surf and reggae to rock, BWMF delivers music that connects and inspires.  Click Here for Tickets and More Information

A Family Affair Celebrating Trails Blazed Both Past and Present

ASHEVILLE, N.C. (Tue. Nov. 18) — Truth & Salvage Co. is set to release a new single called “Black Ribbon Highway” on Tuesday, December 2, 2014. Co-written by guitarist/vocalist Scott Kinnebrew and his father Michael Kinnebrew last year, the song was inspired by the elder Kinnebrew’s adventures as a youth splitting time between oil prospecting with his “wildcatter” father across East Texas and being “schooled on the hard-working ranch of a crusty, homesteading, cowboy uncle,” as he describes it, on the plains of eastern New Mexico.

Watch a preview of the new song here: http://bit.ly/TSCo_BlackRibbonHighway_TeaserVid.

This will be T&SCo’s first release after parting ways with the record label and management they’d been with since their 2008 inception. “It was great working with Pete [Angelus, of Angelus Entertainment],” says Scott Kinnebrew, “he introduced us to the Black Crowes and to Megaforce Records and we had a wild and fun ride with them.” However, after two albums and an EP (including their self-titled debut produced by the Crowes’ Chris Robinson) and five years of steady road work with the Crowes, the Avett Brothers and many others, the band needed to hit the reset button and take a breather.

Plans to write, record and resume touring are set for the spring of 2015. In the meantime, the release of “Black Ribbon Highway” is meant to “keep the fire burning with our fans while we’re off the road,” Kinnebrew says, and in a small way to welcome to the world T&SCo’s first “band baby,” Smitty’s daughter with his wife Monti, Charlie Marie.

Says Kinnebrew, “The circumstances of this song are so unique and tied to family that the band felt we’d best serve the song by offering it as a single now, during the holidays, rather than holding the song until another record was ready.”

Michael Kinnebrew’s summer months as a pre-teen in the Fifties were spent with his uncle at the Reversed LK Bar ranch in eastern New Mexico. In the non-summer months he’d drive with his dad all around the mammoth state of Texas prospecting for oil. Michael’s father was a “wildcatter,” a “total rambler” who would take young Michael on never-ending backcountry pursuits of land leases that might or might not produce oil. Most often not.

Which meant that those summers at his uncle’s ranch made up Michael’s favorite memories; he could spend his days playing, being a kid and riding horses instead of driving with his dad all around Texas sniffing out oil. The highway sung about in the song is Texas Highway 84, once a trail that made up an early part of the storied Route 66. It was the road Michael rode every summer to get to the Reversed LK. He writes in the lyrics to “Black Ribbon Highway,” “You’re the trail that carried this boy through his life.”

The Writing and Recording of “Black Ribbon Highway”

Scott describes his dad and co-writer as “a new old-timer who recently has been taking to songwriting and guitar-fixing.” A highly accomplished oral surgeon who specialized in repairing cleft palates, Dr. Kinnebrew “just decided he wanted to learn how to fix old jacked-up guitars, so he taught himself and he’s really good at it,” says the younger Kinnebrew. “He had the lyrics to what became ‘Black Ribbon Highway’ when I visited home last. Then we just sat down together with guitars and carved out the music and the melody.”

Scott had forgotten about the song after a few months, but his dad kept on him about how great it would be if Truth & Salvage recorded it. Scott says, “I kept blowing the idea off, but finally I sat down to listen to the voice memo we made and was surprised by how cool the song turned out. I recorded a demo and sent it to the band and asked them if we could schedule a day off during a run last summer to get into a studio and track it. They love my dad, and they really loved the tune and said ‘Hell yes!’”

Michael met up with Truth & Salvage Co. for two days at Electric Thunder Studio in the heart of Nashville’s “studio city” neighborhood, Berry Hill. ET’s Geoff Piller engineered and provided invaluable insight, while Scott Kinnebrew took his first-ever turn at producing. They spent a short time running over the tune and finalizing the arrangement, and then just dug in and went at it.

“All the parts everybody ended up bringing to the table were perfect,” Scott reflects, “and my dad was a kid in a candy store, never having recorded in a studio before. His energy brought something real special to the table. His harmonica playing set the whole tone for the session! We had a blast recording with him.”

Truth & Salvage Co is featured on the Birthplace Sessions (http://birthplacesessions.com)

It will be great to return to our roots at the Hotel Cafe in Los Angeles, CA for a 2-night run on August 7 & 8th.  This may be the only chance you west coasters will get to see us play in the coming months.  Make the trek and catch the shows… we promise you will be HAPPY!

With many special guests, these shows will be like coming home after a long journey.  Here’s the info… get your tickets NOW!

And then…Coming up a few days later…

Truth & Salvage Co. plays with M.O.E. at the 4th of July Festival.  Click here for TOUR DATES to find out more info!

We haven’t been in touch for awhile and wanted to let you all know about just a handful of dates we’re playing this spring. See the end of this post for ticket info!

First, if you happen to be in the Columbus, GA, area TONITE, Tim is playing a solo set at the Loft, more info at TheLoft.com. Tim is also playing solo this Saturday the 10th at the Do317 Lounge in Indy, more info at Do317Lounge.com. Scott just finished playing some solo dates as well, check out his goings-on at scottkinnebrew.wix.com/scottkinnebrew.

On May 17, Tim, Walker, Smitty and Dean are appearing with Carl Broemel from My Morning Jacket to perform Truth & Salvage and Broemel tunes alongside some choice covers to honor a fallen mutual friend at the Double Door in Chicago. Local H and Split Single (featuring Britt from Spoon) are also playing, so if you’re in the Chicago area that weekend please try to get tix for that one! It would mean a lot to us and to the beneficiary family to see you there.

Then Truth & Salvage proper fires back up in Greenville on Friday the 23rd! From there we’re pleased to be hitting the Long Creek Music Fest again this year on the 24th, and then we’ll return to Asheville on the 25th where we’re playing a new venue for us, the LaB. Supercool chunk of Carolina shows!

After that we’re back in Nashville doing a little recording, which we’ll report back to you on soon but we’re definitely excited to be back studioin’ together for a couple days in Music City. On Wednesday the 28th, we’re thrilled to be appearing at the legendary Bluebird Café in Nashville, where we’re doing something we’ve never done before, an all-acoustic “In the Round” set where we’ll tell the stories behind all your favorite T&S tunes. Only 15 tickets left so if you’re thinkin’ about trekking to town for it, better make it happen right quick!

We finish this run with a great Eddie Owen Presents benefit for Songs for Sound outside of Atlanta at the Red Clay Theatre on the 30th, and then a return to Tupelo and the thankfully just-reopened Blue Canoe on the 31st. A brief tour to be sure, but one we’re really looking forward to! We’re thinking about some shows in the West later in the year but as of right now we don’t have any other shows planned, so if you’re around for these May gigs we’d really love to see ya at ‘em!

Hope 2014’s been great for everybody so far, and here’s to an even better second half of the year. See y’all real soon!

“We can’t thank you all enough for your continued love and support. We know a lot of you have reached out and requested us to play more shows, but after 5 years of almost non stop shows, it’s time that we slowed down a bit and worked on our personal lives. We miss you all so much and hope to see you soon and appreciate your steadfast love and understanding. “

This just in from AIMS / Alliance of Independent Media Stores 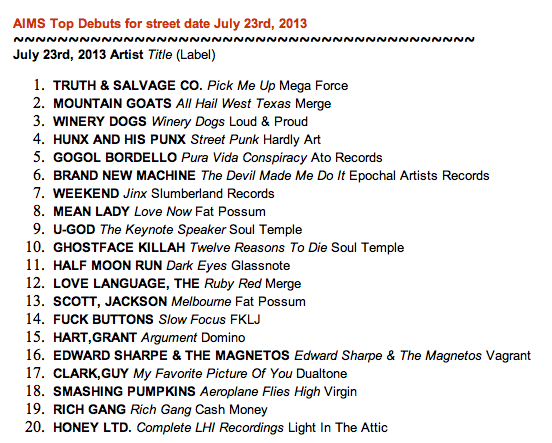